Over the last few weeks, the 4th Dimension team has completed their latest sporting challenges. Practicing what they preach!

Peter Copsey, Co-Director and Founder at 4th Dimension, has beaten his personal best at the Hackney half marathon by completing it in 2 hours and 4 minutes”.

Peter said, “Thanks to my good friend Rob, (to my right), not only did he get me to a new time, but also with enough energy left to make the beer tent. Sub 2hr challenge next year”. 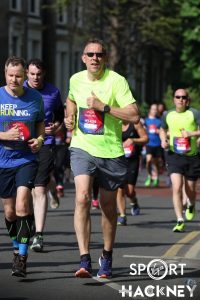 Tony Copsey, Co-Director and Founder at 4th Dimension, has smashed his target of completing the Mallorca 312 http://www.mallorca312.com. He achieved a finish time of 6 hours and 50 minutes.

Tony said, “Delighted to have finished the course this year, following last year’s major crash in the rain, great support from the Brookman’s Park CC!’) 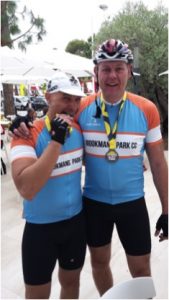 Jenny said, “It was my second year to have completed the world famous mud race, and I was chuffed to have knocked 7 minutes off of my previous time, completing it in just 12 minutes”. 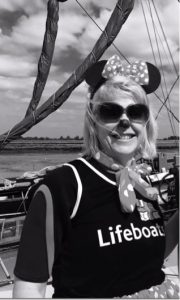 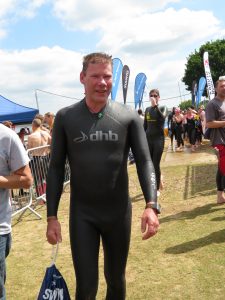 Later this year, Peter will complete the Kokoda Trail, http://www.kokodaspirit.com.au, Tony is planning another cycle challenge this year and Jenny is going to do the Blackwater Triathlon.

If you would like to know more about how 4th Dimension combine lessons from sport and business excellence go to our website on www.4d.uk.com.

ESRG are delighted to announce that 28th March sees the return of the very successful Annual Wheelchair rugby tournament, taking place at Sedgefield Community College. The event has been organised by the Darlington Mowden Park Community Scheme sponsored by ESRG Group.

It will see Mowden Park 1st Team players take on teams from the NE Bulls WRC, Help for Heroes Phoenix House Recovery Centre and Irwin Mitchell Solicitors. Support from ESRG has enabled the event to run again this year.

Wheelchair rugby is a wheelchair based sport for disability affecting all four limbs. It is a growing sport which is developing every year as more people become associated with it. As one of the only full-contact disability sports, it is little wonder wheelchair rugby, aka ‘murderball’ was one of the biggest hits of the London 2012 and Rio 2016 Paralympic Games.

Read this one to the end… there is a brilliant prize on offer!

The festival & Ibiza silly season is just around the corner at last, and we want to help make your summer go off with a pop.

Over the summer we’ll be working with Ibiza Ice across a number of events both at home in the UK, and on the White Isle of Ibiza.

What this means for you is access to loads of competitions to win festival and event tickets, festival survival packs (think sunglasses, phone chargers, and for the eternally optimistic – condoms), and of course – cold, lovely, alcohol.

And so to kick things off, Ibiza Ice are offering one winner FOUR VIP TICKETS to We Are FSTVAL (26th-28th May, Upminster, England), which is about to sell out.

Then just do two things: tag your three mates who you’d bring to the festival, and hit the ‘Like Page’ button in the post to follow Ibiza Ice.

What is Ibiza Ice? 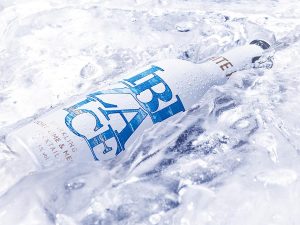 We could give you the full sales pitch, but we’ll leave that to Ibiza Ice.  What we can tell you is that for the last few weeks our Friday afternoons have been ‘Ibiza Ice‘ fuelled, and our stocks are going down QUICKLY – always a good sign!

Check out the Ibiza Ice site for more info on the brand, the drinks, and how to serve.

Our client Spectris plc., the productivity-enhancing instrumentation and controls company, today announces that Kjersti Wiklund has been appointed to the Board as a Non-executive Director with immediate effect.

Announcing the appointment, John Hughes, Chairman of Spectris said: “I am delighted that Kjersti has agreed to join us. She will bring significant knowledge of the international telecommunications sector to our discussions and her skills will be a valuable addition to our Board.”

There are no further details to be disclosed in respect of Listing Rule 9.6.13.

Find out more about our client Spectris here.

Olympic gold medal diver Chris Mears says an injury that almost killed him turned his life around and made him the champion he is.

Mears ruptured his spleen in an accident in Australia in 2009 when he was just 16. At that time he admits that he was a failure at school and going nowhere.

Doctors had to operate to remove his spleen and gave him only a five per cent chance of survival but Mears pulled through and began to reassess his life and start to put some effort into the things he was good at.

And just eight years after coming close to death, he won gold in the synchronised 3m springboard event with Jack Laugher at the 2016 Rio Olympics.

“I had a mid-life crisis when I was 16,” he recalls in an exclusive video for FUEL.

“I realised that I was being an idiot at school and I had to do something about it and work hard. I would not be in the same position that I am now if it hadn’t happened to me, so it’s a blessing really. It only was positive.”

Find out more from Chris Mears and his experience with Kicca Media here.

SunLight Solutions and manufacturer amBX, have announced the availability of a new integration driver for the Lutron Homeworks QS system with the amBX lighting effects generator; the system can be seen on demonstration at the Pulse Cinema showrooms in Stansted, UK.

The amBX integration driver was created for SLS by Andy Casey of DemoPad. Casey has many years experience with Lutron technology and has an in-depth knowledge of the amBX solutions, so the Lutron developments were a natural progression.

This latest development allows full integration of amBX Light-Scene Engine into a Lutron Homeworks QS system and opens up the entire dynamic and interactive lighting experiences possible from the amBX system. 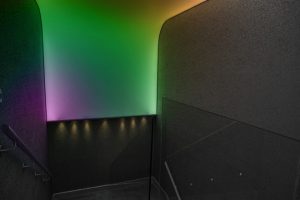 Neil MacDonald, COO amBX, commented: “We’ve been looking to add amBX capabilities into a Lutron system design for some time. This development makes it a seamless experience for the user and we’re excited at the breadth of posibility this opens up for designers and installers” The amBX Light-Scene Engine works with any number of DMX controlled lights and now, designs and installations based on Lutron QS will no longer be restricted to a limited capability of this type of lighting.

Kevin Martin, MD of SunLight Solutions added: “Installers have been asking for a true integration solution so that they can add the excitement of amBX into Lutron projects. I’m delighted this is now posible, we already have new dealers with new projects on the strength of this facility.”

ESRG development plans are in for Birmingham City Centre regeneration.

Planning has been submitted for 400 new apartments on two derelict industrial sites in Digbeth, Birmingham.

ESRG’s plans include partial demolition, refurbishment and erection of new buildings at 234-236 Bradford Street, to create 162 one-bedroom and 131 two-bedroom flats and six ground floor commercial units. There will also be parking for 61 cars and 292 bikes in a complex ranging from four to eight storeys.

In a second project, the team are planning to carry out further demolition before constructing 148 apartments, three ground floor commercial units and 11 parking spaces at nearby 250 and 251 Bradford Street and its corner with Alcester Street. This element will range from four to nine storeys and comprise 91 one-bedroom and 57 two-bedroom apartments with parking for 150 bikes.

Neil Grinnall, Director commented, “The vast investment in recent years in Birmingham city centre has changed the face of a once industrial city. Digbeth will be the subject of ongoing redevelopment and the scale and location of proposed buildings and associated commercial and amenity spaces reflect this city aspiration.

Both schemes add to ESRG’s current project portfolio which includes major residential and split use developments in Poole, Birmingham and the USA.

Thirty-channel network Hooplakidz has also signed on with MoMedia. The network is owned by YoBoHo, which reaches more than three billion views each year (with Hooplakidz representing about two-thirds of those views).

Also heading under the MoMedia umbrella is language-education platform Badanamu (pictured) from Korea’s Calm Island. The integrated digital and physical platform for educational content is home to 200 unique educational videos, 200 storybooks with interactive apps and more than 150 learning games.

This year’s Rugby Expo will be returning to Twickenham Stadium for the fifth consecutive year, just 26 days after the World Cup final, providing all involved in the sport with the first opportunity to debate the relative success of the tournament from a global, local and professional club perspective.

The event will this year also move to Thursday/Friday, as Rugby Expo looks to further support and engage those wishing to attend from the community game on day two.

Run in partnership with and continuing to be supported by Premiership Rugby, RFU, Pro12, the Association of Rugby Agents, Super League and the RFL, the event is now regarded as the meeting place for the key decision makers of the sport.

Building on the success of previous years, Rugby Expo 2015 will look to host more than 50 leading speakers from across the sports industry, 40 rugby-focused exhibitors and more than 800 attendees including a targeted 400 plus grass roots clubs.

New for 2015, Rugby Expo has launched two new packages for delegates in order to maximise attendance at the two day event. Availability is limited this year to just 150 ‘paid for’ passes, with these sold on a first come first served basis. Prices start from just £245 + VAT.

Tickets will again be made available free of charge to those in senior positions at grass roots rugby clubs to attend day two of Rugby Expo. Clubs that wish to attend on day two need to register for tickets and provide the name, contact details and role of the individuals attending in order to qualify for free tickets.

Commenting on the confirmation of the 2015 dates, John Hockey, chairman of event owners Rugby Ventures, said: “We are delighted to confirm our return to Twickenham Stadium for 2015 and equally delighted to announce dates so close to the end of the Rugby World Cup.

“As the home of the World Cup final and the epicentre of the Rugby World Cup, the chance to bring Rugby Expo back to the venue within just a few weeks of the final is something we are excited to announce. Rugby will be high on the sporting agenda and the timing of this year’s event will allow it to play a central role in initiating the debate of what happens next.

“With involvement from key organisations including the likes of the RFU, Premiership Rugby, the Association of Rugby Agents and Super League in discussion and a large number of exhibition stands already sold or reserved, Rugby Expo is set to build on its position as the must-attend event for the business world of rugby.”

To discuss sponsorship or exhibitor opportunities or to find out more about attending Rugby Expo 2015 as a delegate, contact the team on +44 (0) 843 289 0583 or e-mail Jenny Forbes, head of business development, at jenny@rugbyexpo.com.

To register your interest in attending from a grass roots rugby club, e-mail Lauren Chambers at lauren@rugbyexpo.com.